Estrus and Mating in Dogs

When does a female dog first come into heat?

Puberty or sexual maturity in the female dog usually occurs around 9 to 10 months of age. The smaller breeds tend to go into estrus or 'heat' earlier and some females can have their first heat cycle as early as four months of age. On the other hand, the large and giant breeds can be up to two years old before they come into heat for the first time. For many dogs, the first heat is 'silent' or does not have clinical signs associated with estrus. Additionally, many dogs' first estrus cycle is unlikely to allow successful breeding, therefore the standard practice is to wait until the second or third heat cycle before breeding.

How often do female dogs come into heat? 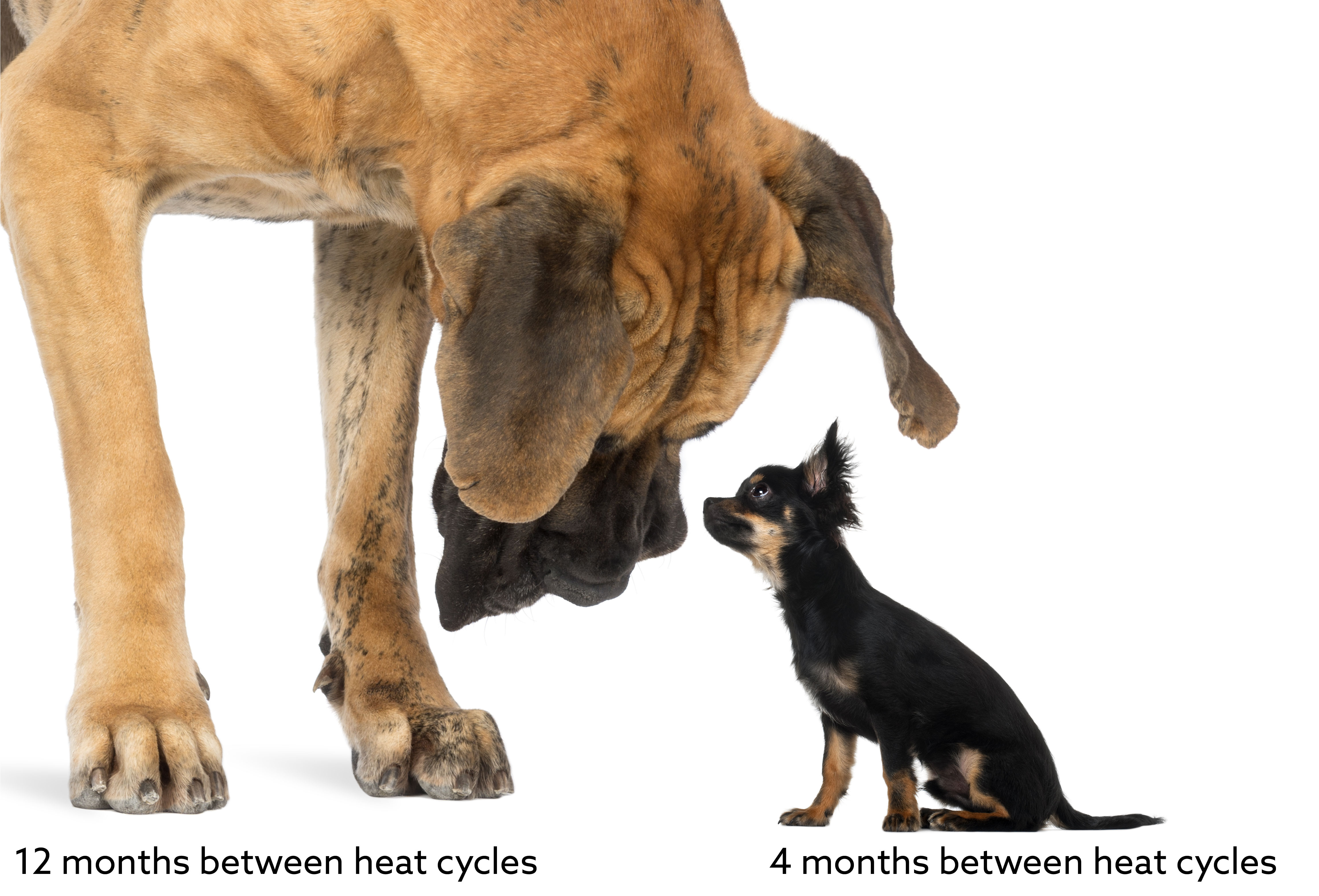 On average, this occurs about twice a year or every six months, although it varies from dog to dog.

Small breeds tend to cycle more regularly than the larger breeds. The interval between heat cycles tends to be 4 to 12 months with an average of 7 months. An exception is the Basenji and sled dog breeds. These breeds tend to go into heat only once a year, typically in the spring.

There is no evidence that irregular heat cycles predispose the dog to false pregnancies or pyometra (uterine infection).

What are the signs of heat?

Vulvar swelling is the first physical indication of an impending heat cycle. However, the most obvious recognizable sign of heat in dogs is vaginal bleeding. This may not become apparent until a few days after the female has come into estrus. Some female dogs experience heavy vaginal bleeding during estrus, while other dogs have minimal bleeding. If you are concerned, consult your veterinarian.

From the beginning of the heat period, she will be attractive to male dogs, but will usually not be receptive, or allow mating until about 7 to10 days into the cycle. As the cycle progresses, the color and appearance of the discharge change. At the beginning, it is usually quite bloody and thick in appearance, but gradually it changes to a watery, blood-tinged discharge. The receptive period for mating usually corresponds to this change in the appearance of the discharge.

"The urine contains pheromones and hormones, both of which signal any interested males that she will be receptive soon."

You may also find that she is passing small quantities of urine more frequently. The urine contains pheromones and hormones, both of which signal any interested males that she will be receptive soon.

How long does a heat cycle or estrus last?

Heat cycles vary, but average two to three weeks for most dogs.The heat cycle begins with the first signs of vulvar swelling or vaginal discharge. It ends when all discharge ceases and the vulva has returned to its normal size.

How do I know when it is the best time to mate my dog?

This can be difficult. Most dogs ovulate and are receptive around the eleventh day of estrus. The discharge is usually less bloody (often described as a salmon color) and the female will be actively looking for a male. The female may stand and present her hind end for the male to be mounted or may tuck her tail to the side. However, ovulation may occur either early or late during the heat cycle.

Are there any tests to determine when to mate my dog?

Yes. There are two simple tests that your veterinarian can perform:

1. Vaginal cytology or vaginal smears. A simple microscopic examination of vaginal cells will detect changes in cell appearance and numbers. This technique has been used for many years and is reasonably reliable. It is non-invasive and does not cause discomfort for the female. Most vaginal smears are performed over several days, to look for changes in the cells that predict ovulation and the best time for breeding.

2. Serum progesterone test. This measures the progesterone level in the blood. This test is very sensitive and has become popular due to its accuracy. Some pets will require several tests done over a series of days to predict ovulation. Some veterinarians prefer another daily blood hormone test, LH (luteinizing hormone) instead of serum progesterone. Your veterinarian will discuss the different testing options and what is best for your pet.

"The serum progesterone test gives a very good indication of when mating is most likely to be successful."

Your veterinarian may be able to perform both tests at the veterinary practice, though sending samples out to a laboratory gives a more accurate result. The serum progesterone test gives a very good indication of when mating is most likely to be successful and is useful for females that have a history of unsuccessful mating or if the dog will be traveling a considerable distance to the male dog.

What can I do to ensure mating is successful?

Surprisingly, male dogs appear to be more stress sensitive than females during mating. Successful matings are more common when the male dog is in his own environment. For this reason, females are usually taken to the male dog's home for breeding.

"Male dogs appear to be more stress sensitive than females during mating." 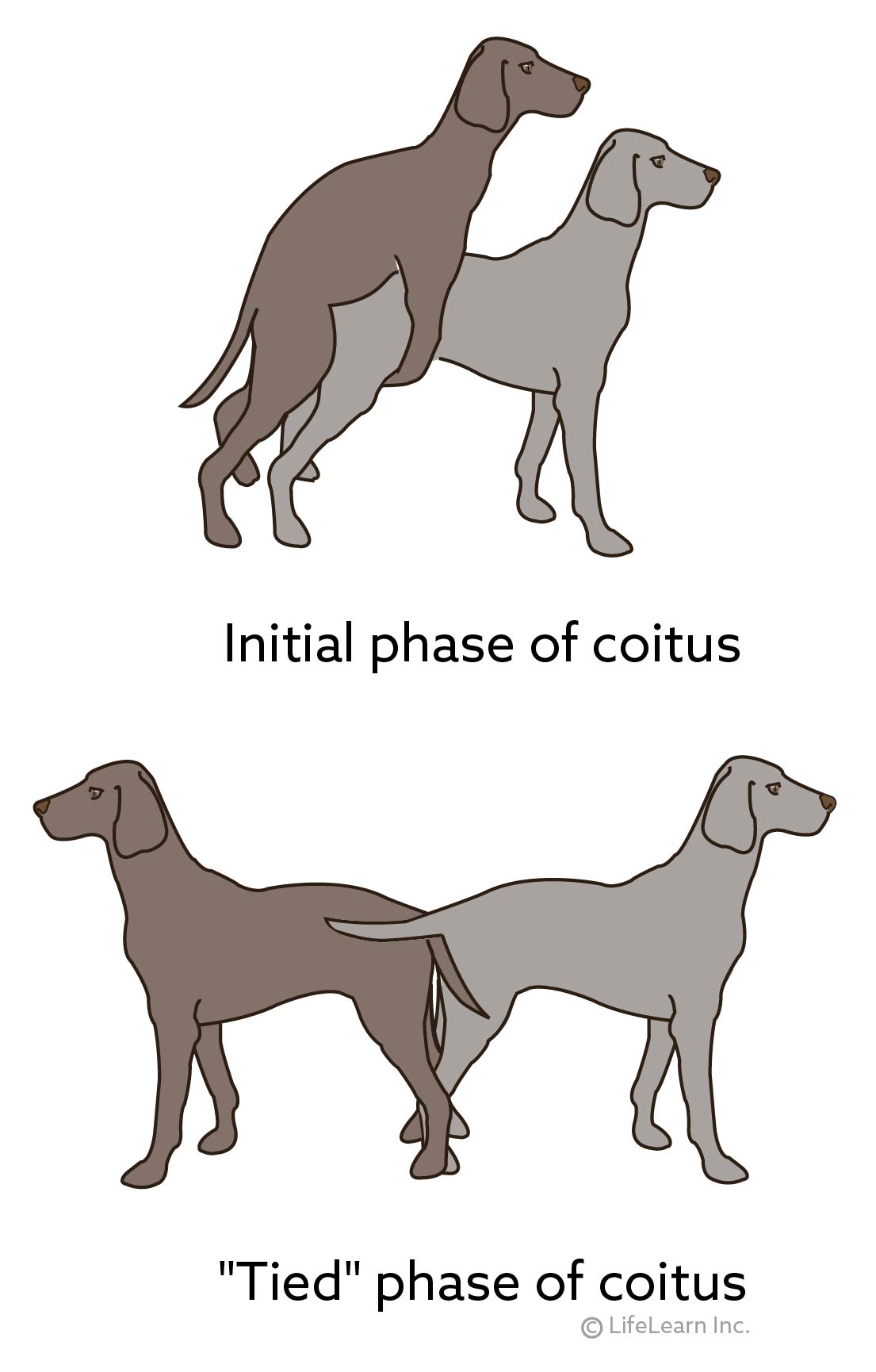 The time of mating is extremely critical and it is highly recommended that you have your femlae tested to determine the optimal days for breeding. For most females, the best time for breeding is between the tenth and fourteenth day of estrus. However, some females ovulate as early as the third or fourth day or as late as the eighteenth day. Blood tests or vaginal cytology will assist in determining the best period for your dog.

It is normal to arrange for two matings, also called services, for your dog, often 24 or 48 hours apart. Check these details with the owner of the stud when making initial inquiries. Also, be sure to ask what will happen if your female dog does not become pregnant as a result of the stud service. It is common for owners of the male dog to offer a free service next time.

I was told that my female had tied well with the dog and that only one service was necessary. What does this mean?

During coitus, part of the dog's penis (the bulbis glandis) swells and enlarges. The female's vaginal muscles contract against the bulbis glandis, preventing the penis from being withdrawn. This is the 'tie' that is considered a desirable feature of a successful mating. It is important to note that pregnancy can occur without a tie. Once tied the male dog will often step over the female or be turned by handlers into a position so that the animals are back to back. The tie will usually last for five to ten minutes.

I found my dog tied to a female dog during a mismating. Was there anything I could do to separate them?

There is little point in trying to separate animals that are locked together in this way. Buckets of cold water, water pistols, cap guns, and so forth do little to speed up the process of separation and merely upset or potentially injure the dogs. In fact, forced separation can result in serious injury to the female and should be avoided.

If a mismating has occurred, discuss it with your veterinarian as soon as possible so your options can be reviewed.