What is endogenous ACTH? 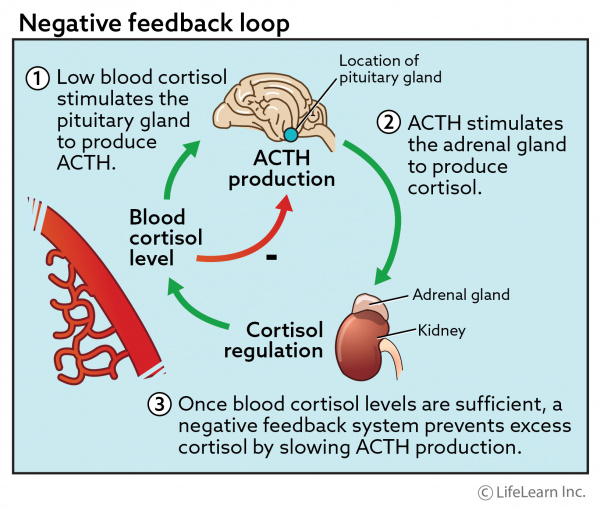 ACTH (or adrenocorticotropic hormone) is a hormone produced by the pituitary gland in the brain. The term endogenous simply refers to the ACTH that is produced by the animal itself (as opposed to synthetic ACTH, which is used for diagnostic testing purposes).

"ACTH regulates the production of cortisol by the adrenal glands and its concentration can be measured in the blood."

ACTH regulates the production of cortisol (a stress hormone) by the adrenal glands and its concentration can be measured in the blood.

If the level of cortisol in the blood is low, the pituitary gland will be stimulated to secrete ACTH. In turn, an increased blood cortisol level will reduce the amount of ACTH being secreted by the pituitary in a negative feedback system.

What can the measurement of ACTH tell us?

If Cushing's disease (hyperadrenocorticism) is caused by excessive pituitary production of ACTH, an increased concentration of ACTH will be found in the blood.

No. In both healthy and diseased pets, ACTH is released from the pituitary in an episodic or pulsatile (e.g., up and down) fashion. Therefore, the concentrations of ACTH found both in health and with the different types of Cushing's disease might overlap and not allow a clear differentiation of the cause of the disease. Additionally, stress may also cause periodic

increases in endogenous ACTH concentrations. Thus, endogenous ACTH values are most useful in the investigation of the type of Cushing's disease that is present once the Cushing's syndrome has been confirmed by the use of other laboratory tests.