What is pyometra, and how does it occur? 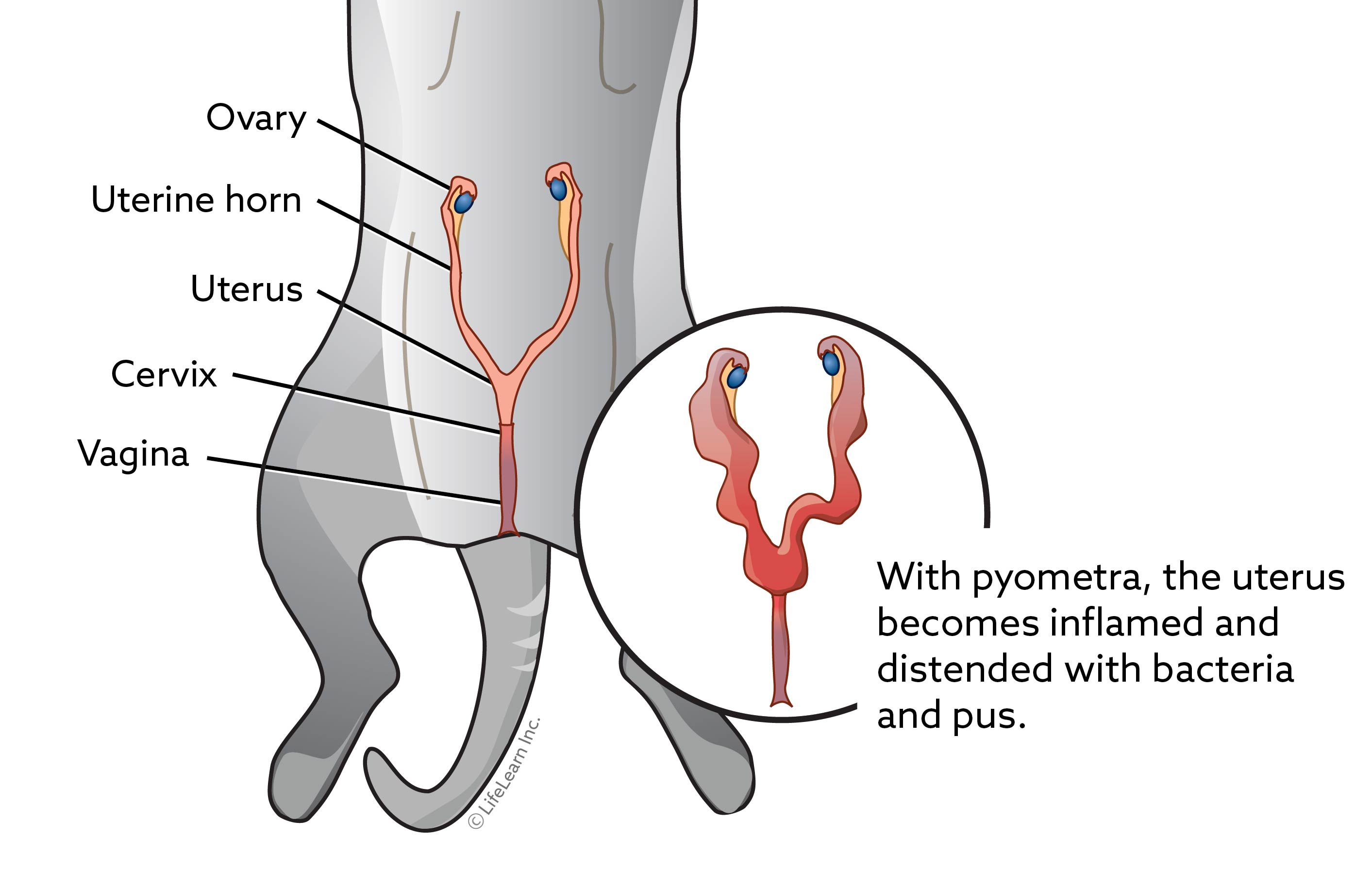 Pyometra is a serious and life-threatening infection in the uterus. The condition must be treated quickly and aggressively.

Pyometra is a secondary infection due to hormonal changes in a female's reproductive tract. Following estrus (heat), progesterone levels remain elevated for several weeks, stimulating the uterine lining to thicken in preparation for pregnancy. If pregnancy does not occur for several estrus cycles, the lining increases in thickness until cysts form in the uterus. This condition is called cystic endometrial hyperplasia. The thickened cystic lining secretes fluids, creating an ideal environment where bacteria can grow. Additionally, high progesterone levels inhibit the ability of the muscles in the wall of the uterus to contract and expel accumulated fluids or bacteria.

Another contributing factor is that white blood cells, which normally protect against infection, are inhibited from entering the uterus during estrus. This normal occurrence allows sperm to safely enter the female's reproductive tract without being damaged or destroyed by these white blood cells. The combination of these factors often leads to infection.

What else can cause changes in the uterus?

Progesterone-based drugs can cause changes in the uterus similar to the estrus cycle. In addition, estrogen or synthetic estrogen drugs will increase the effects of progesterone on the uterus. Drugs containing both estrogen and progesterone are sometimes used to treat certain conditions of the reproductive system. Any intact female receiving hormones must be carefully monitored for the development of pyometra.

How do bacteria get into the uterus?

"...when the uterine wall is thickened or cystic, perfect conditions exist for bacterial growth."

When does pyometra occur?

Pyometra may occur in any sexually intact young to middle-aged cat; however, it is most common in older cats. Typically, the cat has been in heat within the previous four weeks.

After many years of estrus cycles without pregnancy, the uterine wall undergoes the changes that promote this disease. Pyometra usually occurs two to eight weeks after the last estrus or the heat cycle.

What are the clinical signs of pyometra?

The clinical signs depend on whether the cervix remains open. Purulent discharge will drain from the uterus through the vagina to the outside if it is open. This discharge may be observed on the skin or hair under the tail or on bedding and furniture where the cat has recently laid. Because cats are usually very concerned with cleanliness, the discharge is usually cleaned up before it can be seen. With an open pyometra, fever, lethargy, anorexia, and depression may or may not be present.

"Because cats are usually very concerned with cleanliness, the discharge is usually cleaned up before it can be seen."

If the cervix is closed, the discharge that forms cannot drain to the outside. It collects in the uterus, causing distention of the abdomen. The bacteria release toxins that are absorbed into the circulation. Cats with closed pyometra become severely ill very rapidly. They are anorectic (will not eat), listless, and depressed. Vomiting or diarrhea may also be present.

Toxins released by the bacteria affect the kidney's ability to retain fluid. Increased urine production occurs, and the cat drinks large amounts of water to compensate. This occurs in both open- and closed-cervix pyometra.

How is pyometra diagnosed?

Cats examined early in the course of the disease may have a slight vaginal discharge and show no other signs of illness. However, most cats with pyometra are seen later in the illness. Any very ill female cat drinking an increased amount of water and has not been spayed should be suspected of having pyometra. This is especially true if there is a vaginal discharge or a painful, enlarged abdomen.

Cats with pyometra usually have a severe elevation of the white blood cell count. They often have an elevation of globulins, a protein often associated with the immune system, in the blood. The specific gravity (concentration) of the urine is very low due to the toxic effects of the bacteria on the kidneys. However, these changes are non-specific and may be present in any cat with a major bacterial infection.

How is pyometra treated?

The preferred treatment is to surgically remove the uterus and ovaries by performing an ovariohysterectomy (spay). Cats diagnosed in the early stage of the disease are very good surgical candidates. The pyometra surgery is somewhat more complicated than a routine spay at this stage. However, most cats are diagnosed when they are quite ill, resulting in a more complicated surgical procedure and a longer period of hospitalization. Intravenous fluids are required to stabilize the cat before and after surgery. Antibiotics are usually given for two weeks post-operatively.

"The preferred treatment is to surgically remove the uterus and ovaries by performing an ovariohysterectomy (spay)."

I want to breed my cat in the future. Is there an alternative to surgery?

For most cats, surgery is strongly recommended to treat pyometra. There is a medical approach to treating pyometra, although the success rate is highly variable and not without considerable risk and potential long-term complications. Prostaglandins are a group of hormones that lower the blood level of progesterone, relax and open the cervix, and cause the uterus to contract, expelling the bacteria and pus. They can be used to treat this disease, but they are not always successful and have some important limitations.

The use of prostaglandins to treat pyometra has variable rates of success, recurrence of the disease, and successful breeding in the future. Your veterinarian will help you decide the best course of treatment depending on your cat’s needs.

What happens if pyometra is not treated?

The chance of successful resolution without surgery or prostaglandin treatment is extremely low. If treatment is not performed quickly, the toxic effects from the bacteria will be fatal in many cases. If the cervix is closed, the uterus can rupture, spilling the infection into the abdominal cavity. This will be fatal. Pyometra is a serious medical condition that requires prompt treatment.