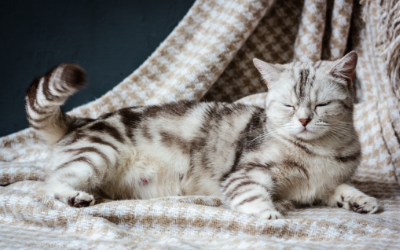 Congratulations! Your furry family member is expecting! Most pregnancies and deliveries go smoothly, but as a caring pet owner (a.k.a. soon-to-be grandparent), you should be prepared for the unexpected. Here is what you should know about common pregnancy complications.

Unlike their human owners, who carry babies for 9 months, cats and dogs are pregnant for about 2 months (61-65 days; average 63 days). During that time, lots of changes occur in the pet’s body. Some you see (bulging bellies) and some you do not. You should recognize the often subtle signs of trouble and know when to intervene so that your baby and your baby’s babies all thrive.

During pregnancy and nursing, growing babies tap into their mother’s calcium supply to form bones and teeth. Sometimes, the mother’s body cannot keep up with the increased demands for calcium. If the mother’s blood level of calcium falls too low (hypocalcemia), a serious condition called pre-eclampsia can occur.

"A dog or cat with pre-eclampsia may become restless, nervous, and disoriented."

A dog or cat with pre-eclampsia may become restless, nervous, and disoriented. Her legs get stiff, causing her to walk with a stilted gait. She may pant as her body temperature and respiratory rate increase. In severe cases, tetany (extreme rigidity) occurs, which can be life threatening.

Your veterinarian treats pre-eclampsia as an emergency and will perform a physical exam and blood tests to determine calcium levels. In severe cases, intravenous (IV) calcium may be carefully administered while monitoring the heart. After the crisis has passed, oral calcium supplementation may prevent further episodes; however, there may be risks associated with this therapy.

Over-supplementation of calcium may actually make matters worse. The body maintains a balance of calcium in the blood stream by constantly adding and removing calcium from the bone. This action is regulated by a hormone produced by the parathyroid gland. If a dog receives too much calcium supplementation during pregnancy or lactation, the parathyroid gland may sense that its action is not needed and shut down. In other words, giving too much of the calcium supplement can backfire and cause decreased blood calcium.

Veterinary supervision is needed to properly maintain a healthy calcium blood level without shutting down the parathyroid gland.

Glucose metabolism is a basic function of life. A pet’s body breaks down carbohydrates from food to form glucose. Insulin is needed for body cells to extract the glucose from the blood. Like other forms of diabetes, gestational diabetes occurs when the body either does not produce enough insulin or does not utilize the insulin it produces. As the name implies, gestational diabetes occurs during pregnancy (gestation).

"Managing gestational diabetes is critical to the health of both mother and babies."

Managing gestational diabetes is critical to the health of both mother and babies. Your veterinarian will perform blood tests to determine your pet’s glucose levels and prescribe insulin injections as needed. Treating diabetes requires strict attention to feeding, appropriate insulin injection protocols, and diligent monitoring of blood glucose levels.

Symptoms of gestational diabetes include excessive drinking and urination. The urine may be almost clear in color and many previously house-trained dogs will begin having accidents. Unregulated diabetes will result in weight loss, even though the dog has a voracious appetite. It is common for pregnant pets to be tired, but those with gestational diabetes experience extreme lethargy. The good news about gestational diabetes is that it usually resolves once the pups or kittens are born. 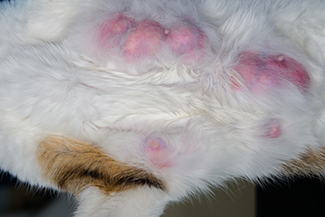 Mammary glands enlarge toward the end of pregnancy as milk production begins. Nursing usually goes smoothly, but some mothers develop mastitis, a painful condition caused by inflammation or infection of the mammary glands. Mastitis occurs most often during the first two weeks after delivery. Dogs and cats have many teats with associated milk glands and mastitis can affect any or all of them.

"Mastitis occurs most often during the
first two weeks after delivery."

Mastitis is caused by bacteria, such as E. coli, Staphylococcus, or Streptococcus, that invade the mammary gland. The bacteria enter the gland via several routes. If the mother is septic, bacteria can enter the glands directly from the blood stream. If the environment is contaminated, bacteria can enter through the teat opening or duct. Additionally, if the babies injure the teat or mammary gland with their teeth or nails, they can create a point of entry for bacteria.

Breasts with mastitis become swollen, hot, hard, and painful. Besides the visible signs of mastitis, other symptoms include decreased appetite, fever, dehydration, and lethargy. Warm water baths or compresses, oral anti-inflammatory medications, and antibiotics may aid in treating mastitis.

"Nursing actually helps the mother by emptying the glands."

With mild to moderate infections, pups and kittens may still be allowed to nurse even though the milk from infected glands may be discolored or bloody. Nursing actually helps the mother by emptying the glands. If the milk threatens to make the babies ill, if nursing is too painful for the mother, or if the mother is too sick to nurse, the babies will need nutritional supplementation.

To prevent mastitis, examine teats and glands daily for trauma (cuts, scratches) and clip nails of nursing babies. Keep bedding fresh. Clean teats after the mother goes outside. Clip any long hair around teats to make it easier to keep them clean. Encourage babies to nurse from all teats to prevent over-usage of individual glands

The placenta is a sac that covers the fetus in utero and is normally expelled as “afterbirth” when the baby is born. The placenta is usually passed within 15 minutes after the birth of each baby, but if the placenta remains in the uterus, problems arise.

"...if the placenta remains in the uterus,
problems arise"

Since you cannot see inside the uterus, it is hard to tell when a placenta fails to be expelled. Comparing the number of babies born to the number of placentas expelled is hard to do since the mother often eats the placentas. So, it is important to observe mama closely after she delivers the babies for signs of retained placenta such as vomiting, decreased appetite, fever, lethargy, or discolored (green) vaginal discharge.

Your veterinarian may diagnose retained placenta after an examination and abdominal palpation, but may also need to perform blood tests, vaginal cytology, ultrasound or radiographs (to rule out a retained baby). Administering oxytocin, a drug that encourages uterine contractions, may help expel the placenta. Rarely, surgery is needed to remove a retained placenta. Ovariohysterectomy is a last resort in severe cases.

Knowing the risks associated with pregnancy should not diminish the joy of pregnancy. Be prepared, so that you can intervene if necessary, and then relish the miracle of birth.